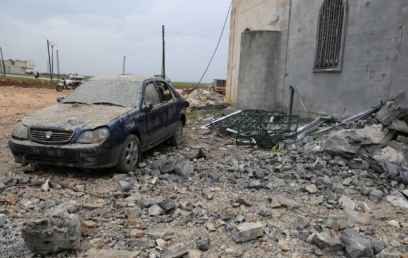 I dreamed that my oldest Sister and I were were were living in a society that was extremely controlled. We were not supposed to be out of our "zone" but there were supplies that we needed to get so we left, without any authorization or permission. We went to an area of town that so very ran down and destitute. The lay of the land and surroundings reminded me of a bomb that had exploded and the debris that was left in the aftermath. We found ourselves at a place where the buildings were surrounded by 8 to 10-foot chain link fences. There was a chainlink gate just as high as the fence that we went up to. There was a gentleman that was expecting us. For whatever reason, I was aware that he was trying to help us with getting what we needed. He freely unlocked the chainlink gate, pushed it open so we could enter and then shoved it back and relocked it again.

Inside the gate, I saw the ground was all dry dusty dirt. There was no green grass anywhere. From where I was standing, to my right was a brick building that had approximately 8 floors. The windows were blown out so none of the windows were closed. I noticed the people in this area were so very "strange." They behaved strangely.

As I stood in this dry, junkyard of an environment with piles of rubble and debris around me, my Sister and I spoke to the man who had let us in. As we were standing there talking with him I glanced at my arm. In my right arm were several heavy duty staples that had been shot in the top part of my arm in between my wrist and elbow by someone in the building several floors up! The man who let us in saw the staples and simply said, "This is the way things are around here. Just remove them." I did.

Everyone living in this area behind these huge chainlink fences/town was living in such absolute poverty. I saw one man slightly leaning out the window 3 floors up. He didn't have a shirt on. As I stood there and watched him, I could see that he had a piece of broken glass in his hand. He was taking the glass cutting the top of his arm. I stood there and watched the blood flow from it. In watching this man, I felt as though somehow the people that were in this zone were being held against their will an forced to live the way they were. They had no choices or freedom or liberty to go outside of the fenced area.

The man who let us in took us to a car so we could leave. He opened the fence gate and we left with the car.