I looked back and saw people, HUNDREDS of people running!!!! They were running fast to get out of the airport. Then...people began screaming! We stood, watched and wondered, "WHAT is going on!!!!"

PROPHETIC DREAM OF ATTACKS TO COME 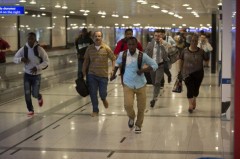 I woke up from having the most unusual prophetic dream. I was with my Sister, 2 nieces, and nephews at the airport. We were walking back to our cars when we heard a commotion behind us. (We had just exited the main terminal). I looked back and saw people, HUNDREDS of people running!!!! They were running fast to get out of the airport. Then...people began screaming! We stood, watched and wondered, "WHAT is going on!!!!"

Someone screamed, "THEY'RE SHOOTING!!!!!!" People began dropping to the ground. Some for safety and others because they had gotten shot.

We (my Sister, 2 nieces and nephews) fled into an area that was being built. The construction was being built directly in front of the main terminal. It had three sides with the front facing the terminal open and was a 3 story construction. Because it was in the midst of being constructed you could literally walk through the building's wall beams.

Looking back I saw two "things" snaking their way under the ground - like moles running fast. But they weren't moles. The ground rose as the "things" made their way right underneath the surface of the ground. Smoke. Great puffs of smoke and dirt flew everyyyywhere!!!! These "things" were FAST! They went about 1/4 mile away and then they snaked back to where we were. ....then they exploded!! They were "traveling bombs!!!" BOOM!!!! BOOM!!!! When they reached the back wall, they hit then exploded!!! Then another one came! This one was right outside of the area we were in! It exploded too! Some people were hurt so badly. They had black all over their clothes.

There was a set of stairs in the very corner. We all ran to the stairs hoping they would lead somewhere. They did. The stairs led to a basement that had been constructed prior to the pad being poured for the foundation of the building site. We were not allowed to leave the airport grounds because it was not safe. The area was huge with many many rooms. We were able to leave many hours later. It seemed as though it were in the middle of the night. Hundreds of people found shelter and safety underground.

On 04/22/04  I came home from work and was just sitting at my kitchen table relaxing.  I reached over, grabbed the Daily Newspaper and right there on the FRONT PAGE it said, "[the airport that was in my prophetic dream] seeks bids on $67M parking garage". This is what they were building..... this is what was being constructed in my dream. A parking garage. ... strangely enough, the article said it was going to be a FIVE story parking garage.... although THE PROPHECY showed THREE!!!

On 04/22/09 (Yesterday!) FIVE YEARS TO THE DAY I was at home in the evening reading the daily online local news. On the front page of the news site, it was noted that the airport broke ground for the new construction.  They have also changed their original architectural plans from five stories  ...to three. Just as prophecy revealed it to be.

They are planning for the new construction to be completed by July 2010.

My heart grieves over this prophecy. I have prayed and asked God what He wants me to do with this information. ...I don't know what to do. As a child of God, all I know to do is pray. Just pray.

The attachments to this vision are the news articles as referenced above.