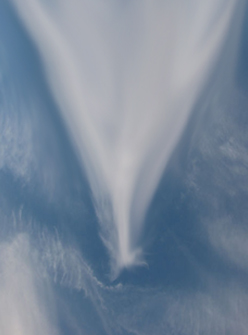 Last night I had a dream that I was standing outside doing who knows what. Just hanging around, I guess enjoying the weather. It's natural for me to be outside so it definitely wasn't uncommon for me to outside by any means. This day the sky was blue but it was cloudy enough to where the clouds were so thick over the sun that you could look at the sun without it hurting your eyes.

I was standing outside and looked towards the sky. When I did, the clouds had literally formed a "V" in the sky to where it looked like heaven had split open from the top of the sky to 3/4 down. The "V" shape was entirely filled with light and it was sitting directly in front of me in the sky! It thrilled me so much to see this that I immediately put both of my arms out, outlining the "V", and I threw my head back and just smiled!