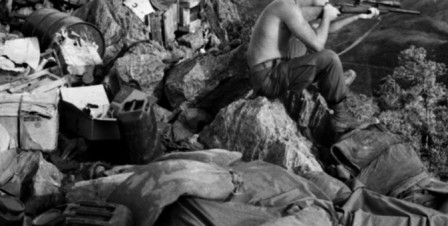 NO WEAPON FORMED AGAINST YOU SHALL PROSPER!

Al-Qaeda had invaded the USA with bombings, killings, and mass destruction.   They were men minus a conscience.

There were rubble, trash, and debris everywhere!  From the bombings, there were piles of rock everywhere you looked. The houses and buildings were gone!   Al-Qaeda had taken hostages, with me being one of them.

It was nighttime and there was a fire going next to the piles of rock and debris.   The fifteen feet of rock and debris were in a half circle around the fire.  Approximately four to five Al-Qaeda terrorists were scattered very closely in this area. Sitting on the rocks they appeared to be so very arrogant, confident and laid back as they sat holding their rifles in their hands and handguns on their side. I was sitting across from the rock pile on another rock pile not nearly as high as the one in front of me.   Directly across from me sat one of the terrorists smoking a cigarette while his rifle laid on his lap.  He kept staring at me not saying a word.  I stared back.  Not saying a word.  He knew I wasn't afraid.   In spite of the terror going on around me, I had no fear whatsoever.  After gazing at me for quite some time he stood up and nonchalantly walked over to me.  When he got in front of me his right hand reached down quickly while grabbing the front of my shirt and jerking me up as hard as he could.   I still continued staring not speaking a word.  While staring right into my eyes, he took his left hand which contained a gun and he pressed into my chest. While continuing to stare at me he pulled the trigger approximately three times. Before the first bullet left its chamber, from my peripheral vision I could see a hand that came out of NOWHERE on my lower left side!  The hand came out it stopped directly in front of the barrel of the gun separating the gun from me!   I could see the hand but the terrorist couldn't!!!   Still gripping the front of my shirt he pushed me back and still staring at him, I sat down.

That's all I recall.