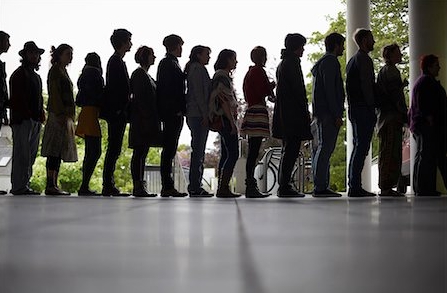 There is a new world order coming.  An order where the government can deem you as being "not needed" and simply annihilate you.   An era where one will take photos as proof of what is going on, but the government can replace them with other images.

People were placed in line for so-called physical and I knew this.  I knew what they were doing but what they were actually calling it and their attempts in portraying it to be.

To the side, I saw an older gentleman writing things down as people went through the line.  He looked at my paper, (my son was with me as well) and the older gentleman said, "Ahhhhhh a model 400!"   He whispered to us, "We'll keep this one, (referring to me) and your son, too!"  There was a lady behind us and I heard her say "What?".  The older gentleman leaned over and said to me, "YOU area a Warrior!  God designed you to build websites and your work is being much needed!"

No matter where we went or what we did, the government could see us. I saw men who did nothing but bake bread, 24/7. They were so tired.

I saw one of my Sisters. She was there too. getting ready to go through the line.  I knew she would not answer the questions right and I grew extremely alarmed!  I walked over to her, took her card and we ran to a place where I began filling it out.

Things started filling the air, or the sky, rather.  I took my cell phone and started taking pictures.  Five minutes later I went to show them to someone and they were gone!!!  The government had taken them and replaced them with something else.